About The Baby Mini Doc Project

“We strive to show just how indescribably beautiful the totality of the parenthood journey really is  – the mess, the chaos, the joy, and the wonder of it all.”

As every parent of a young child knows: time goes by way too quickly. So who has time to capture these moments (with both parents actually in the frame), much less put them together in a professional, creative way, amidst everything else that has to get done? The Baby Mini Doc Project does! Led by award winning documentary filmmaker (and mom) Melissa A. Gomez, The Baby Mini Doc Project creates cinematic mini “day in the life” documentaries capturing the magic of everyday moments and milestones with your littlest ones.

Let us take this one important item off your family’s to do list, and create a beautiful original work of art that will serve as a time capsule of these wondrous first years together, and be shared within your family for generations to come.

Visit our Details page to learn about our unique creative process and more! 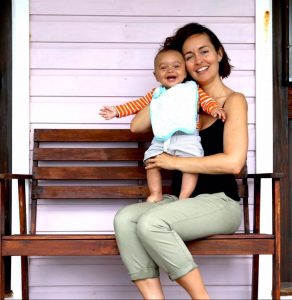 Melissa is an award-winning documentary filmmaker originally from the Caribbean island of Antigua. Throughout her career in NYC, Melissa has worked with award-winning documentary filmmakers including Ralf Schmerberg at Radical Media, Academy Award nominated directors Heidi Ewing and Rachel Grady at Loki Films, and Academy Award winning director Alex Gibney at Jigsaw Productions. She co-produced episodes of the Emmy-nominated television documentary series MAKERS for PBS and Nine for IX for ESPN. She has produced behind-the-scenes content for AMC’s Original Series Hell On Wheels and Low Winter Sun. In Antigua, she founded and ran her own production company with her husband Chris, and later worked as a freelance production manager on advertising campaigns for H&M and Malibu Rum. Melissa was also supervising producer on “Me on My TV”, an 8-part documentary series broadcasting on the cable network FLOW.

Melissa directed and produced the feature-length documentary, Silent Music, a portrait of her deaf family which won Best Documentary awards at both the 2014 Maine Deaf Film Festival and the 2012 CaribbeanTales Film Festival, as well as the Audience Choice Award at the 2013 Toronto Deaf Film & Arts Festival.

Melissa has a Masters of Arts degree in Screen Documentary from Goldsmiths College, University of London, and a Bachelor of Arts in New Media from Ryerson University in Toronto.

Melissa is also a certified yoga instructor and spends her days off entertaining (and being entertained by) her toddler and 5-year old.

Mini documentaries time-capsuling fleeting moments with your littlest ones…

“Melissa produced the most beautiful, humorous, and loving account of a day in our crazy new life.” – Natalia Linos, Baby Mini Doc Client

Like what we do, but have questions before committing?